The One Where My Neck Was Warm

I don’t think wearing two scarves is a thing. I have not extensively researched this topic (and by extensively, I mean at all), but I can’t think of a time where I’ve ever seen someone wear two scarves at the same time.

Yesterday, though, I couldn’t decide which one of my blue scarves I liked better.  I tried the royal blue one on first, but before I took it off, I tried the floral one, just to give me an idea – I didn’t expect that idea would be to wear both.  But, I kinda liked it, unconventional though it was.

The solid scarf is actually a pashmina and was a gift from NYC.  Gotta love street vendors!  The floral I bought for about $5 at Rue 21 – it may be a cheap juniors store, but they have some great trendy accessories – and pretty scarves.

And these lovely nude pumps (cream, maybe, but my skin is white enough, I’m calling them nude) were one of the 7 pairs I bought this weekend.  These came from Macy’s, and regrettably, you can’t see the detailing, but they are a buttery suede, faux-animal print of some sort.  And I love them. 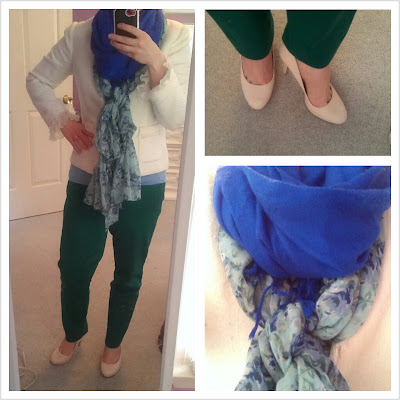 Don’t Call it a Comeback