The Boys are Back in Town

Today’s the day I’ve waited for since last February…NFL Kickoff!!!  My two fantasy teams are drafted, the Colts instagram followed, and my jersey is dusted off – I’m ready!

A word of explanation – I’m wearing a #18 Peyton Manning Colts jersey.  This jersey is now irrelevant.  Peyton no longer plays with the Colts, and I should have either a #12 Andrew Luck Colts or a #18 Peyton Manning Broncos jersey – or both.  However, I’ve as of yet been too lazy/cheap to buy either, so I wear Peyton’s to support both the Colts and the Broncos.  Today, it’s the Broncos, which, as you may remember from yesterday’s post, is the team that is going to win the Super Bowl this year.

I’m fortunate to support a team whose colors I actually like.  But me being one of the girliest football fans anywhere, I can’t just throw on a jersey with jeans and sneakers (side note:  I can’t remember the last time I wore sneakers outside of the gym).  Instead, I have to wear a stack of bangles, shoes with flowers and bows on them, and white pants.  Obviously. 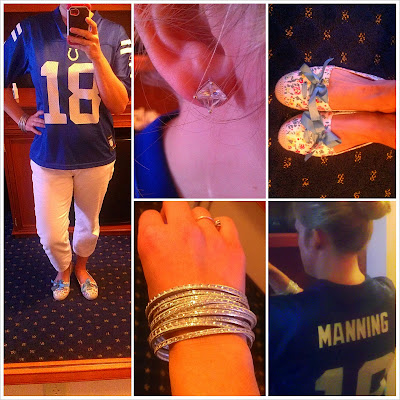 Eye of the Tiger

What to Wear: Travel Edition