While today’s outfit is mine, the inspiration is those men and women who lost their lives that terrible day 12 years ago. Like everyone, I remember exactly where I was that day. Being a typical 16 year old with no New York or DC connections, through, I wouldn’t really understand the impact and significance of what happened that day until much later.

However, the thing that did most stand out to me from that period, even as a 16 year old, was the way Americans rallied together. Suddenly, it was not only not politically incorrect to say God Bless America, but highway signs in the Chicago suburbs said it. United We Stand became our mantra. I still have a sweatshirt with a glittery USA printed on it. American patriotism was at an all time high.

So, it is in that spirit that I’m wearing red, white, and blue today.  I may look a little costume-y, as I tend to do when I dress for a theme (no shame), but I love America.  With all due respect to other nations, we really are the greatest on earth.

To the men, women, and children who died that day, we honor your memory.  To those who lost loved ones, know we have not forgotten.  And to any who would ever dare try to attack America again, never forget those poetic words of Toby Keith, “We’ll stick a boot in your ass, it’s the American way.” 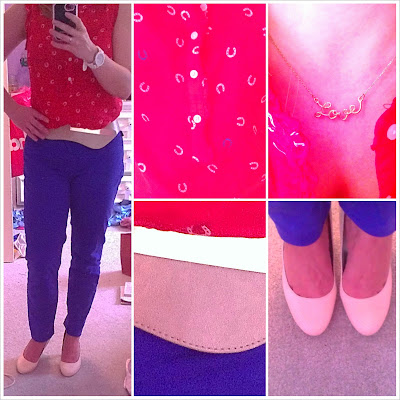 Rubber Ducky, You’re the One

A Maxi to Build a Dream On