There are very few subjects in life on which I do not have an opinion.  Even on issues I don’t care about – say, the NBA or the latest season of Dancing with the Stars – I will find an opinion.

Now, I don’t think I’m obnoxious about it.  At least, I hope not.  But, I just can’t help it – I’m rarely truly neutral.

This past weekend’s Alabama/Texas A&M game was no different.  To be honest, I don’t really care about college football.  I support Clemson because that’s where my brother goes, and I’m an SEC girl because my family is.  But, otherwise, I hardly follow NCAAF.

However, this past weekend’s game was a big one, and being the pop-culturally relevant girl that I am, I had to watch it.  Which means, I had to have an opinion.  Judging by my outfit below, I’m guessing you can tell which team I supported.

Really, I don’t care much for Alabama.  Any team that wins all the time just gets to be annoying.  And, I used to really like Texas A&M – I even have a 12th Man t-shirt.  But, then they switched to the SEC and began to worship the boy that is Johnny Football, and I quickly fell out of love.  My NCAA loyalties are quite shallow.

So, I dug up my “crimson” and white (I don’t have any real crimson, so true red had to suffice), swallowed my pride, and irritatingly yelled “Roll Tide!” with the best of them.  And roll they did.

Who are you rooting for this football season? 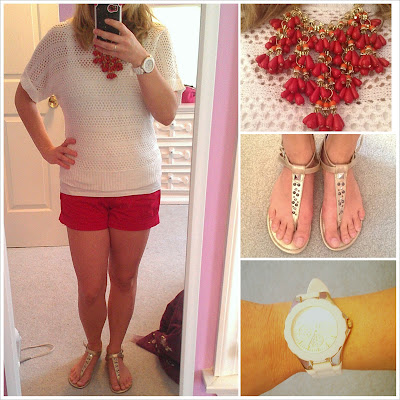