Now back to our regularly scheduled programming: My Awkward Life.

Y’all, I had the most awkward moment in my not-as-short-anymore-life a couple weeks ago. And this is coming from the girl who asked out her chiropractor – and then went back to him. It was terrible.

As ground work for this story, let me say that although I’m on this kinda-break from dating, I did have one “pre-existing” guy that resurfaced about the same time I started my break. So, I was grandfathering him in and had a date planned with him for the Tuesday after Halloween.

The Saturday before Halloween, I took my cute little Tooth Fairy costume out on the town with some friends. As I was about to leave (literally, I was checking Uber and Lyft rates), a man dressed as a chicken started talking to me, and he happened to be super interesting. (This is not important to the story, but he was from New Jersey, had gone to college in Oklahoma for the rodeo, moved to Nashville for music, still was the front-man for a band, but during the day was a commodity trader who was loaded and lived on his boat (I called it a yacht, but I think it was technically a boat.). FASCINATING. And it was all true. I googled him.)

Anyway, so the Chicken and I ended up talking outside for quite a while, and as we’re sitting there, a guy high-fives me. While I’m high-fiving him back, I look up and see that his buddy, dressed like a tiger, is the guy I have a date scheduled with for 3 days later.

Pause for a moment and let’s reflect on how small of a town Nashville really is. I run into people I know all the time. Usually in less uncomfortable circumstances.

Back to my story, the Tiger says nothing, but keeps walking, and I tell the Chicken that I have a date with that tiger on Tuesday. I figured he might as well share in the discomfort with me, although to his credit, he was much less phased by it than I was.

The Chicken and I keep talking, and after a little while, I’m calling an Uber again, when from across the street, I hear my name. The Tiger yells hey and waves and keeps walking. And I want to die. The Chicken says I can go talk to him, but that’s weird. I think I just did a little half-step dance move, said “this is the most awkward situation of my life”, and got in my Uber.

Needless to say, nothing ever came of either of those two guys. No big loss with the Tiger – this was about his 4th chance, anyway. But, I wouldn’t have minded talking to the Chicken more, even though I don’t think he shared my values. So, maybe it was for the best.

And, there you have it. Definitely the most awkward moment I’ve ever had – hopefully the most I will ever have. It really was like being in the Mindy Project or some other sitcom. But, I survived, and maybe the two bullets dodged made it all worth it.

As my shirt says, though, “Life is short.” Embrace the awkward (and wear sequins).

I’m going to be honest – this is not my most favorite outfit ever.  Mostly because I think it makes my hips look big.

However, I wanted to show you my attempt at bridging the summer-into-fall phase.  It’s just so awkward – like the middle school of the calendar year.   I thought maybe if I mixed some orange with navy and yellow my goal would be accomplished, but I think the white sweater kept it too sunny.  And since someone told me I looked like a summer princess, I clearly failed.

The struggle is real, y’all.

But, it’s been raining for the last four days, and I think 80 degree days are behind us, so perhaps my wardrobe can finally get it’s braces off, have a growth spurt, and stick to the appropriate season.  Only time will tell. 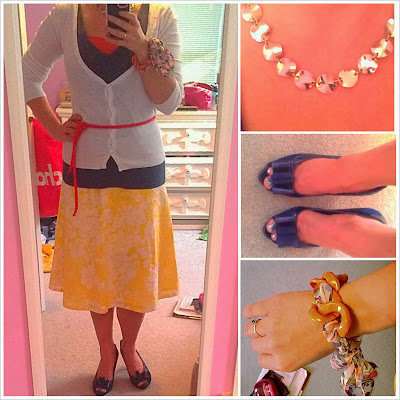