About three years ago, I started praying about leaving Virginia Beach for a position at an anti-trafficking non-profit. I really wanted to go to Nashville then – in part because of all the non-profits headquartered there, in part because I’d enjoyed visiting the two times I’d been there previously, in part because I was obsessed with the show of the same name, and in part for reasons I probably can’t really even identify. It was just on my heart.

A couple months later, God answered my prayer to leave VB and work for a non-profit, but He sent me to Georgia instead of Nashville. And as I’ve been not shy about saying, I was MISERABLE. I do not exaggerate when I say that the two years I lived in Georgia were the worst two years of my life, and I was on the verge of real depression. From about 4 months in, I prayed every day that I would get to leave, but every job application I sent out was ignored.

And then my  job was eliminated, and I was rather unceremoniously kicked out the door, with only two weeks of severance and no warning.

If that’s where the story ended, it would be a rather depressing one. But this is a good story. A great one, in fact.

With no leads anywhere and no connections to Georgia, I had the perfect opportunity to strike out on my own where I really wanted to be – Nashville. I’ve shared before about the timing of my job elimination with my lease, etc.; God opened the doors for everything about my move. I had no money, but my dad had some to loan me. I had no job leads, but I found one perfectly suited for my interests, and started just over two months after moving. I even found a great hair stylist on the first shot, nothing short of a small miracle.

Also, my tax refund was double what I was expecting, something I’ll never be able to explain.

So now, here I am just a few months after being downsized, and I have paid off not only my debts from unemployment, but  the remainder of my student loans. I went from a significant amount of debt to debt-free in three months, because God took care of me.

One of the things that was very hard for me in Georgia was not having a church. I tried, not exaggerating, over 30 churches and could never find one I liked. I ended up going to the mega church in town with some frequency but didn’t mind if weeks went by without me darkening the door.

But here in Nashville, I’ve found the perfect church for me. It’s a more traditional format, complete with a robed choir, mixed with Pentecostal theology. Seemingly half the church went to my college, and it’s nice to be around people familiar with things I’m familiar with. I’ve joined said robed choir, and they’ve adopted me as part of the family, giving me church friendships I so missed for two years.

The other night we got to sing with Sandi Patty, my childhood musical idol, on her farewell tour. I never could have even dreamed that I would accompany Sandi Patty sometime – it would not have occurred to me that such a thing could be possible. And yet, God knew how special that would be to me, and He really did provide “above and beyond all I could ask or imagine.”

I realized something a few days ago that made this all the more sweet. My church is nowhere near my house, and even if I had stumbled upon it physically, the name of the church and size of the building would have deterred me from trying it. But, a week before I lost my job, I was in Nashville for work and met a new friend. We had mutual friends and a lot in common, and I knew it was a divine appointment. When I moved, I visited her church a few times, but it wasn’t quite the right fit for me. It did, however, meet in the building of a big church with a beautiful choir loft, and I thought, maybe I should just check it out. I went one Sunday morning just after Christmas, and I haven’t stopped going since.

God went before me in my move, opening doors to friendships that led to my church that led to singing with a childhood favorite. He moved on my department chair to offer me more courses than I’ve ever been offered. He provided the finances for me to pay back my dad, buy flights and bridesmaid dresses for my friends’ weddings, pay off my student loans, and have enough left over to start rebuilding a savings. To paraphrase Joel 2:25, He completely restored the years the locusts had eaten.

And, I get to live in Nashville which is the absolute most perfect city, and I am even more happy here than I was miserable in Georgia.

So, today, on the 6th month anniversary of my moving to Tennessee, I want to encourage you that God’s Word is true that He will never leave you or forsake you. I still don’t know why I had to live in Georgia to get to Nashville. I did make a few friends, and met my best friend there. And since living here, I’ve certainly had more perspective on God’s faithfulness and kindness because of my experiences the past two years. Maybe those two things are purpose enough.

Regardless, no matter what you’re going through, please know that God is still going before you, making your paths straight, and opening doors that no man can shut. If you’re in a hard season, don’t give up and keep pressing forward, because your Nashville Promised Land is waiting for you on the other side, and it will be even more sweet because of the pain to get there.

If my story encouraged you, or if you’d like to share a similar story of God’s faithfulness, or even if you’d just like prayer for the strength to persevere, I’d love to hear from you! Comment below or send me an email, and let’s talk.

I Love My Church Sunday

My brother and I both forgot about Menswear Monday.  So, it seems fitting that I instead talk about I Love My Church Sunday!  Last Sunday, my church did a big promo to excite people about the church again – generally, as well as ours specifically.  As part of it, we got t-shirts.  Since I’m on the worship team, I had to wear my t-shirt on Sunday morning.

Now, I do love my church.  A lot.  I will miss it probably more than anything else when I move.  However, I do not love t-shirts (unless they have an Indianapolis Colts logo on them), so I tried to make this one as cute as possible.  Yellow and red is a fun color combo (even if it does make me think of Ronald McDonald), and the yellow made the black, red, and white a little more interesting.  I also cut a v into the neck of the t-shirt, although I neglected to show you that in the picture.  My neck is short, so if I have a round collar right around my neck, I look suffocated.

Daylight savings time has really messed up my already weak photog skills – I don’t know how to get rid of that bath of light at my feet.  I never used to have that problem.  But, at least you get the general idea.

How would you have dressed up the t-shirt?  Or would you be happy for an excuse to be bummy at church? 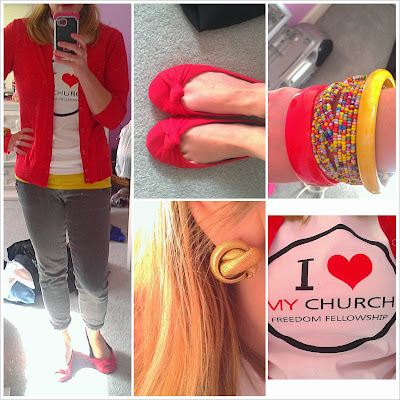 P.S.  My church is Freedom Fellowship of Virginia Beach, if you’re interested and in the area – it really is wonderful.