Falling into the category of “that would only happen to you, SB” is a story from very early in my dating life.  A guy that I’d really liked had recently unceremoniously dumped me for his long-time on-again, off-again girlfriend.   I wasn’t dealing with it very well, so when I learned that he and his roommate were going to a concert one Saturday night, I thought I would try to win tickets from the local radio station.  If I was successful, it would be a sign.

Let me pause and talk about what good luck I have winning tickets from the radio.  As an 8 year old, I won tickets to see the Gaithers (I don’t know why I wanted these tickets; I fall asleep at the concert.  But, I won them, and that was all that mattered).  Many years later, I won tickets to see Kenny Chesney.  So, on that cold night, when I went to the concert arena and basically walked up to the station and was handed two tickets, I was the only one who wasn’t really surprised.

With my best friend in tow, we hurriedly got ready and went back for the show.  Let me pause again and say that at this point in my life, I HATED concerts.  Or, at least, I thought I did.  My only real experiences with concerts was youth group conventions where everyone jumped around, and (as my dad likes to say), “mosh pitted.”  I’m outgoing, but I’m still fairly conservative in my expression.  So, I was literally only going to this show because this guy was going to be there.

When my friend and I found our seats, I texted the guy that I was there.  He was most shocked of all, and probably not all too happy that he now had to come clean and, actually, it wasn’t his roommate coming with him after all, but rather his girlfriend.  My heart sank, but not as much as it would when they walked in to the 10,000 person arena and found their (pre-assigned) seats – two rows in front, two seats down from me.   I could watch them together the whole 3 hours!

I wish I could tell you any of this story is an exaggeration.  I promise you it is not.  Fortunately for me, they were late and not super mushy, and my friend and I ended up having a great time (ironically, the guy she was interested in was also at that same concert; apparently, there wasn’t a whole lot else going on in town that night).  And, most important of all, I learned that I actually LOVE concerts!  I saw a very young Miranda Lambert as an opener that night, which was really fun (I don’t remember for sure, but I think she may have smashed her guitar), and I learned that adults don’t have to jump around.  You can actually be quite calm while enjoying live music.

So, all’s well that end’s well.  Despite my brilliant, but for some reason, failed effort to stalk a man into loving me, it was a successful evening, and while that guy and I never did get back together, we managed to overcome the awkwardness and become sort-of friends.

Has anything like that happened to you?  Do you have luck either with winning tickets or being assigned seats immediately behind your ex and his/her significant other?  What would you have done?!  Let me hear your thoughts!

I may have lied on Wednesday when I said that was my last summer outfit.  My bad.  But for real this time – here is my last nod to that blessed season (I think.)

The occasion for this unintentionally patriotic outfit was a Big and Rich concert, so patriotism was in order, even if it was accidental on my part.

If there were ever a time that red cowboy boots were appropriate, it was this concert, so starting with the boots, I built my look from the ground up, ending with a statement necklace to tie it all together.  I should wear statement necklaces more often because they’re really fun and add interest to any simple look.  Also, my hair was completely flat by the end of the night, a testament not to the failure of my beloved headband trick, but to just how hot and muggy it was outside that night.  And how gross and sweaty I got.  Totes worth it.

I’ve wanted to see the Big and Rich guys in concert since for about 10 years, so this event was definitely a bucket list item checked off.  The fact that it was free made it even better.  And they were just as delightfully rowdy as I expected.

I’ve still got Carrie Underwood on my must-see live list.  Do you have bucket list concert(s)? Have you checked any off yet?  Let me know, because if there’s one thing I love as much as fashion, it’s music.  Let’s chat!

I don’t know if I’ve specifically talked about the omnipresence of sheer right now, but it’s everywhere.  And I really like it!  Of course, being the “tastefully” trendy girl that I am, I always wear a tank underneath.  Even celebs should have more class than to just pretend lingerie underneath sheer counts as being properly covered.  It doesn’t.

This $4 shirt from Body Central has gotten a lot of wear from me in the past few months.  For today’s look (which I actually wore yesterday), I paired it with my favorite coral, added a sparkly belt, a denim skirt I’ve had since college, and some heels to keep the denim from looking too casual.  (Also, the skirt is a weird length for me to wear flats – I look like a frumpy munchkin).

I then took this look on the road, swapping out the longer skirt for a denim mini and the heels for cute sandals.  Much more appropriate for the amazing Miranda Lambert/Dierks Bentley concert I attended last night, and an easy swap to transition from day to casual evening.  (Obviously, I just picked a random Miranda song for the title of this post.  It has nothing to do with what I’m wearing.) 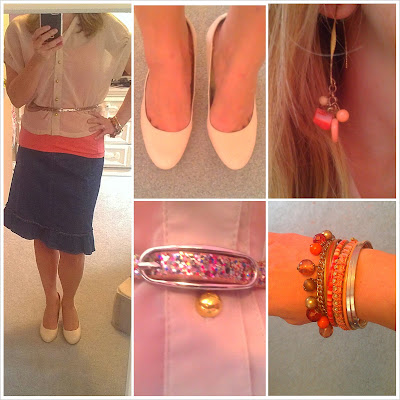 Last weekend, I went to see Thomas Rhett, Jake Owen, and Jason Aldean in concert.  I tend to get very  judge-y at country concerts.  I don’t mean to, but there are just so many girls there looking EXACTLY the same.  I literally saw a group of about 8 girls all wearing white tops with denim shorts and cowboy boots.  Granted, they were about 15 years old, but still.  Variety is the spice of life.

So, with this in mind, I have to pick my outfits for concerts very carefully so I look stylish but not cookie cutter.  I think I accomplished that with the look below.  If not, I at least felt like an individual and I really liked the outfit.  I guess that ultimately is all that matters – even if you do still look cookie-cutter.

Incidentally, the cowboy boots with dressier wear is a trend that I really love.  I really only wear my cowboy boots this way.  After all, my dad may prefer the farmer look, but I’m decidedly removed from that lifestyle.

This weekend I’m going to another concert, but the feel will be quite different.  Because I’m going to see the BACKSTREET BOYS!!!!!  (I challenge anyone to read that and not immediately start singing “Backstreet’s back, alright!”)  A group of 8 of us girls are going, which will be awesome – and we will not all dress in white tops, denim shorts, and cowboy boots.  However, I haven’t decided what I actually will wear yet.  I tried to think back to what I would have worn in the band’s heyday, but I don’t think I still own any JNCO’s or Doc Marten’s.  Alas, I’ll have to forgo embracing my inner middle-schooler this time. 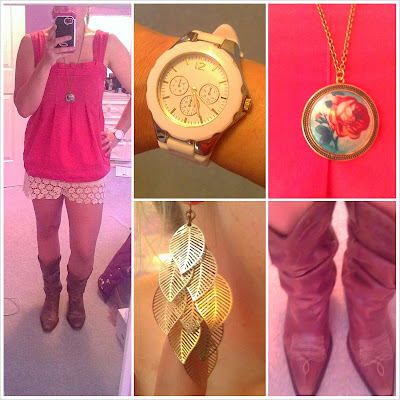 Something ’bout a girl in red cowboy boots

January 31, 2013 / Sarah_Beth / Comments Off on Something ’bout a girl in red cowboy boots

As I type this, I’m feeling a little bit like Dorothy, with a very real concern that my house might blow away.  Dorothy, though, makes me think of ruby red slippers, and ruby red slippers make me think of my red cowboy boots.  Natch.  So at least if I do get blown away, I will go out knowing I had a fantastic outfit.

A couple weeks ago, I went to see Kip Moore in concert.  If you don’t know Kip Moore, here is a picture of him: 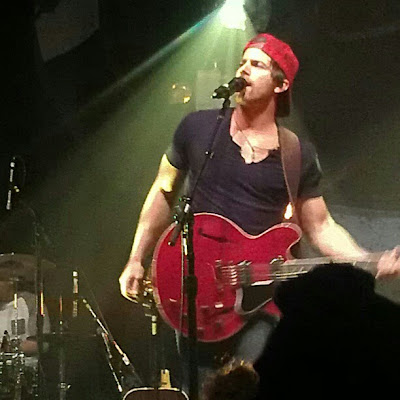 You’re welcome.
Anyway, he’s country (obviously – his name’s Kip), so I wanted to look the part.  Usually when I go to concerts, they’re outside in the summer and way too hot for my boots.  This was an indoor venue in January, though, so out came the red ones.  To be honest, I kinda hoped he’d notice them from stage and call out the girl in the awesome red boots.  That did not happen.
Nevertheless, I think I had a pretty fun outfit, with my multi-colored beaded necklace that helped keep me from looking Christmas-y with a green bracelet and red boots.  I wore a brown tank top under my sweater to give it a comfortable, more earthy feel, and topped it all off with gold earrings.

Alas, I was about the only person at the concert over the age of 22, and one of the few not wearing flannel.  But, I felt good about my choices – something many of my fellow-concert goers probably couldn’t have said. 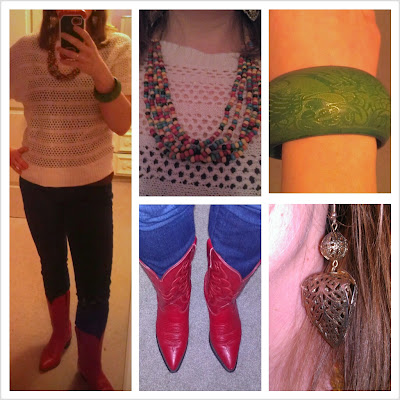