Bang for my Buck

And now for the quarterly (??) installment of, How Does Sarah Beth Have So Many Clothes??

Guys, I give away stuff all the time, but it just comes back to me. And, every time I start to think I’m being excessively materialistic, some amazing deals fall right into my lap, and I can’t help but think maybe it’s okay for me to have a lot of these unnecessary pretty things that make me happy. Who knows.

Regardless, here are my latest finds.

First, I was at the mall recently for a legitimate purpose that had nothing to do with Charming Charlie. But, since I was walking past, anyway…  I decided to stop in and just see if anything was on sale. Lo and behold, not only was there a ton on sale, but their clearance was buy one, get one free!

So, for $40, I came away with two watches, two bangle sets, a bracelet, a necklace/earring set, and four pairs of earrings. That’s 10 pieces of jewelry for $40. Of course it’s cheap and trendy, but for $4/piece, it’s okay if I only wear it a season or two. And I had just been saying the day before that I’d like to refresh my jewelry collection a little bit – ask, and you shall receive!

In haul #2, I happened upon a yard sale the other day while running my errands. Let me first say that I really don’t like yard sales – they overwhelm me and make me feel awkward. Also, I think on the way there a 10 year old might have flipped me off for not stopping at his lemonade stand.

But, I needed a couple odd pieces of furniture, so I thought I’d just stop and see if they had what I was looking for.  This is what I walked away with:

You may notice there is no furniture in this picture… But, this lady was getting rid of some never-worn clothing and shoes (seriously, the tags are still on some of the pieces) – in my size! I got these Jessica Simpson wedges, Adrienne Vittadini shoes, two pairs of jeans, shorts, and 5 tops – all for $25. They were asking $26, but I’m a shrewd negotiator.

So, these are the things that happen to me. I was not looking for clothing this past weekend, or jewelry a few weeks ago, but they just fell in my lap. I think God just appreciates my appreciation for good deals and pretty clothes, and He helps me maximize my limited budget. I don’t know if that’s theologically sound, but I believe it.

Do you have something similar – a special, unimportant thing that you know is a gift from God? Maybe it’s not finding good clothing deals, but perhaps you always find the best burger in any place you travel. Maybe you’re super into cars, and seemingly every time you look out your window, you catch a glimpse of an expensive car. Maybe cardinals cross your path on a daily basis, or you see a friend in every restaurant you frequent. I challenge you to look for the special blessings in your life that show that God sees you and cares about the things you care about. And if you’re willing to share, I’d love to hear!

Billy and Me: Part Deux

The long-awaited part-two of my two-part series on Billy is here, guys – are you ready?  It’s about to get crazy…

When we last left 21-year old me and Billy, he and I were heading off to lunch after a sermon that I will never remember.   I jumped into his huge truck (again, NAIVE.  Aka, just plain stupid.  Honestly, it’s a miracle and a testament to God’s grace that I survived those first 2-3 months of grad school), and we headed over to Chili’s – partly because that was the only restaurant I knew how to get to, and partly because who doesn’t like Chili’s?

As we were talking – about who knows what; I babble when I’m uncomfortable – Billy starts telling me about his glory days of young adulthood.  In the 80s.  When he told me something he’d done in 1986, I couldn’t keep it in any longer, and gently (probably not) blurted out, “I was 1 then…”  Y’all, I knew this guy was older than me, but I’m sure his profile said 27 or something.  Not 47.

As the conversation went on, Billy started telling me about his kids.  I was aware they existed, but I did not know that they were 11 and 12 years old.  Apparently, I was closer to the kids ages than his.  The longer this guy talked, the older he seemed to get, until I was beginning to feel like we were rivaling Hugh’s age gaps:

After lunch, and because apparently I am a glutton for punishment, Billy suggested we go see a movie and I agreed.    The theater was in a small mall, and since we had a little time to kill before the movie, we started walking around the shops.  We passed a jewelry store, and Billy stops and says in all seriousness, “Let’s go in and see if I can figure out what kind of ring you would like.”

WHAT IS HAPPENING RIGHT NOW?!?!

I’ve been on some other bad dates, but taking me to a jewelry store on the first one is by far the most bizarre thing that happened.  To add insult to injury, Billy walked over to the counter, and picked out this skinny yellow gold band with a tiny diamond solitaire, convinced he’d found the winner.  It looked a little like this:

Since you’re reading my blog, I’m guessing you know me well enough to know that Billy was a bit off the mark.  I said, “no, not that one”, walked over to the platinum counter, and picked out something more along the lines of one of these:

What Billy said after that is a bit fuzzy, but the man working the counter was laughing at us.   Fortunately, that got us out of the store pretty quickly.  We went and watched our movie – Fast and the Furious: Tokyo Drift.  Why I remember that, I have no idea. It was not a good movie.  And, finally, it was time to go.

I don’t remember Billy trying a good night kiss, which was good.  At 21, I still hadn’t kissed anyone, and I wouldn’t have wanted to use my first kiss on him, so it could have gotten (even more) awkward really fast.  Billy dropped me off at my car and drove off to Connecticut, and I was free.

To his credit, Billy actually was very sweet and complimentary; he paid for everything and treated me with respect the whole time.  It was just readily apparent that we were not a good match, and who in the world takes someone to a jewelry store on a first date!?  Also, don’t lie about your age on a dating profile, buddy.  Or your ponytail. People are going to figure it out.

Surprisingly, Billy did ask for a second date, and I made up some lame excuse about being allergic to horses and him being super into them (which was true, but probably not an insurmountable obstacle), and that was the end of that.  He went on to buy an engagement ring for another first date, I’m sure, and I went on to dates with many, many more not-quite-as-advertised online profiles.  But, those are stories for another day.

Have a great weekend everyone, and don’t forget to leave me some of your crazy dating stories!

Today’s post is a little different than my usual fare because I have a major announcement to make.  I figured by putting it on my blog rather than writing it all out on facebook I could accomplish two things at once: a) write as much as I want (we all know I’m wordy), and b) entice more traffic to my blog where you will just fall in love with everything I stand for and come back day after day for more.

Rather than an outfit, I give you a simple picture as a hint of what’s coming next.   Any guesses? 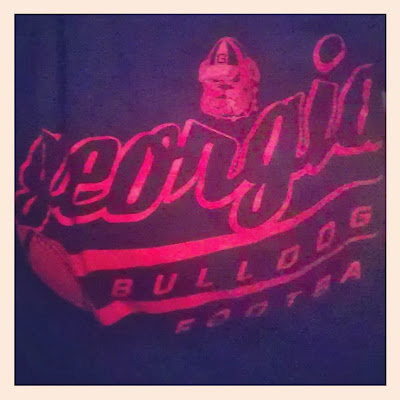 Bring on the pearls, sweet tea, and Bulldogs – I’m moving to Georgia, y’all!

Yes, you read that right.  In a very quick turn of events, I’ve accepted a position at a non-profit in Gainesville (about an hour northeast of Atlanta).  The organization is Rahab’s Rope and they work against human trafficking in India.  For those of you who know me well, you know that this cause is one that I care about greatly, so I’m very excited to be on board.

The job is a great fit for me in so many ways – I won’t bore you with all of those details now.  But, one of best parts is that I get to sell jewelry.  Among my responsibilities will be attending conferences for the organization, at which they sell goods made by the women in India who were formerly trafficked.  We help teach them a skill (in this case, making jewelry and home goods) so they can be financially independent.  In turn, the money from the sale of their products goes to fund the ministry so that greater good can be accomplished.

If you’re like me, when you think of goods sold for a benefit, you think of beaded key chains or salvation bracelets.  I made sure this wasn’t the case before I even took the position (if I have to sell this stuff, then I need to like it).  And I legitimately do – check it out here. (I promise that my blog will not become an advertisement, other than the fact that I’ll likely be wearing a lot of the jewelry and scarves myself.)

So, I’ll be finishing up my job here in Virginia on Dec. 20 and headed down to Georgia that weekend (my parents live an hour away, so that’s convenient for the holidays).  I already liked the Bulldogs (hence the shirt), but I guess I’ll have to be a real fan now – with the permanent caveat that if I marry Tim Tebow I will forsake all other allegiances and only be a Gator forevermore.

I’m going to miss so many things about my current job and my life here in Virginia, but I’m excited about this next chapter.

And you should be, too – I can wear jeans to this new job.  Tastefully Trendy is about to get revamped!