August 3, 2016 / Sarah_Beth / Comments Off on Inspiration in Various Forms

On Monday, I promised another creative take on one of my dresses. I love dresses, but I have a hard time hanging on to them for long, because they are what they are – meaning, you can’t mix and match much. So, I tend to get tired of them pretty quickly.

But, the past few weeks, I’ve tried mixing things up a little by adding cardigans and belting them for a new look. Last week, I got even crazier and layered a lace top over one of my dresses – and I LOVED IT!!!! Seriously, it might be my favorite creation in a long time, and judging by the comments I got that day, I’d say others liked it, too.

The trick to layering, of course, is necklines and sleeves. If the neck were too low or high – or a V-neck – it wouldn’t work. Likewise, if this dress had sleeves showing through the lace, it would be weird. But the fashion muses were on my side this time, and everything matched up perfectly.

Usually when I wear this top, I wear a black cami under it, so the uneven lace edge is completely lost. The yellow background really highlighted it and showed off the pretty detailing. My flower shoes added just the right touch to tie everything together.

True story: it was raining when I was picking out my clothes this morning. If you’ve been following my blog for any length of time, you know that I like to wear black when it rains – and pretty much only then. So, I started out my clothes-choosing process I intended to wear black, and this was the best I could do. I just can’t help myself with bright colors!

But, more importantly, way back in 2013 when I first started talking about wearing black in rainy weather, I said it sounded like it should be a song – and my friend Sage wrote one! It was one of the coolest moments for me as a blogger, but even more amazing, her band, Twisted Tapestry, now has an EP out, and you can buy “Only Wear Black” wherever fine music is sold. And you should – support local music!

Falling into the category of “that would only happen to you, SB” is a story from very early in my dating life.  A guy that I’d really liked had recently unceremoniously dumped me for his long-time on-again, off-again girlfriend.   I wasn’t dealing with it very well, so when I learned that he and his roommate were going to a concert one Saturday night, I thought I would try to win tickets from the local radio station.  If I was successful, it would be a sign.

Let me pause and talk about what good luck I have winning tickets from the radio.  As an 8 year old, I won tickets to see the Gaithers (I don’t know why I wanted these tickets; I fall asleep at the concert.  But, I won them, and that was all that mattered).  Many years later, I won tickets to see Kenny Chesney.  So, on that cold night, when I went to the concert arena and basically walked up to the station and was handed two tickets, I was the only one who wasn’t really surprised.

With my best friend in tow, we hurriedly got ready and went back for the show.  Let me pause again and say that at this point in my life, I HATED concerts.  Or, at least, I thought I did.  My only real experiences with concerts was youth group conventions where everyone jumped around, and (as my dad likes to say), “mosh pitted.”  I’m outgoing, but I’m still fairly conservative in my expression.  So, I was literally only going to this show because this guy was going to be there.

When my friend and I found our seats, I texted the guy that I was there.  He was most shocked of all, and probably not all too happy that he now had to come clean and, actually, it wasn’t his roommate coming with him after all, but rather his girlfriend.  My heart sank, but not as much as it would when they walked in to the 10,000 person arena and found their (pre-assigned) seats – two rows in front, two seats down from me.   I could watch them together the whole 3 hours!

I wish I could tell you any of this story is an exaggeration.  I promise you it is not.  Fortunately for me, they were late and not super mushy, and my friend and I ended up having a great time (ironically, the guy she was interested in was also at that same concert; apparently, there wasn’t a whole lot else going on in town that night).  And, most important of all, I learned that I actually LOVE concerts!  I saw a very young Miranda Lambert as an opener that night, which was really fun (I don’t remember for sure, but I think she may have smashed her guitar), and I learned that adults don’t have to jump around.  You can actually be quite calm while enjoying live music.

So, all’s well that end’s well.  Despite my brilliant, but for some reason, failed effort to stalk a man into loving me, it was a successful evening, and while that guy and I never did get back together, we managed to overcome the awkwardness and become sort-of friends.

Has anything like that happened to you?  Do you have luck either with winning tickets or being assigned seats immediately behind your ex and his/her significant other?  What would you have done?!  Let me hear your thoughts!

I Only Wear Black When it Rains: The Musical

Y’all know how I feel about black. I can only wear it when it’s dreary outside. Since this has been the most rainy summer of my life, though, I’ve been wearing it quite a bit.

Of course, I always remain true to myself with some color.  Turquoise and purple are one of my favorite combos, and I built this look around my cute sandals that I bought in Colombia (yes, that Colombia – I go to cool places, y’all.)

My favorite part of this post, though, is that I can tell you about my awesome friend Sage.  Sage and I went to college together, and she’s an amazing singer.  A few weeks ago, I posted a link on facebook to this Tastefully Trendy entry with the tagline, “I only wear black when it rains. That sounds like it should be a song.”

Well, Sage went ahead and wrote one!  I just think that is the most awesome thing ever, and it makes me feel all warm and fuzzy inside.  Here’s the link to the Youtube video.  It’s a little hard to hear most of the lyrics, but you can definitely make out the “I only wear black when it rains” part.  Sage, thanks so much for writing that, and I’m serious that I’ll promote the heck out of it if you have a studio recording of it someday (plus, I want to live vicariously through your fame!).

Have a great weekend, everyone! 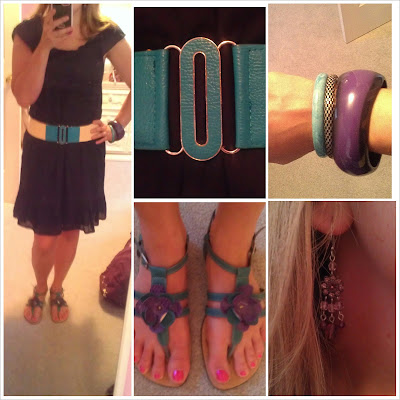