I’ve been waiting to talk about Esther.  Along with Ruth, Esther is the super star woman of the Bible, and I didn’t want to talk about her just because it was expected.  I wanted to have something worth saying.  Thanks to Tim Tebow, I finally do.

This past Sunday, I heard Tebow speak at a church in Knoxville, and he touched on a lot of things.  But, one that especially stood out to me was how he has used the platform given him. If you know about Tebow at all, you know there are a million examples of him being a Good Samaritan.  But, you probably also know that he wore Bible verses written in his eye black during college.  When Florida won the national championship in 2008, Tebow put John 3:16 in his eye black.  As a result, 94 million people googled the verse that is the crux of Christianity.

Exactly 3 years later, Tebow beat the Steelers in overtime during the NFL playoffs.  In an unbelievable turn of events, he threw for 316 yards, the time of possession was 31 minutes, 6 seconds, the viewing percentage was 31.6 percent – just a few of the 3:16 references in that game.  Totally unbeknownst to Tim, his actions again influenced a surge in Bible searches, this time with 90 million people looking up the beloved verse.

The number thing is cool, but obviously, the point was that a simple act of obedience to God can influence so many more people than we even realize.  You never know what impact you can have, so make the most of every opportunity.

Esther is more of a traditional Cinderella story than Leah’s.  Enslaved like Cinderella, Esther was soon promoted to queen through both her kindness (to the eunuch in charge of preparing her to meet the king) and beauty.  But, unlike Cinderella, Esther’s story did not end there.  Rather, she was in a unique position of being able to save her entire people – the Jews – from annihilation.  But, since no one knew she was Jewish, and since the king issued the order in the first place, and since even the queen did not have free access to the throne, Esther took a huge risk in approaching the king.

Fortunately, Esther’s risk paid off and her entire race was saved.  But, had she not stepped out in faith – had she not been obedient – everyone she cared about would have been killed.

Obviously, Tebow’s Scripture eye black is a bit less dramatic than Esther’s risking death, but he’s not in a position to save an entire race of people.  He is, however, in a position to influence millions, and he uses his platform to do just that.

Probably if you’re reading my blog, you don’t have the platform of either Tim Tebow or Esther.  I certainly don’t.  But another thing Tim said is that you never know who is watching you.  No matter what your station in life – student, employee, stay-at-home mom, pastor, choir member, friend – you have people in your sphere of influence.  There is an opportunity to impact those around you, and something as simple as a smile and warm greeting might be all that’s necessary.  Sometimes, you see immediate impact of your actions – death edicts reversed, 94 million people searching the Gospel; sometimes, you see residual results – 90 million people searching the Gospel, 3 years later.  Sometimes you never see the final outcome.  But, what we do does matter and can profoundly change a life for the better.

I don’t want this to be just a nice motivational speech for myself.  I am actively thinking about ways I can be more influential in the Kingdom of God by impacting those around me.  And, I hope you will be challenged by Esther’s and Tim’s examples as I was.  How can you make a difference in the lives of those around you and in the lives of those who are watching?  What small thing(s) is God asking you to do that may alter the course of history – for an entire people, for one person, or even for yourself.  Or, if you’ve already seen God move in this way, please share an encouraging example – I’ve noticed that the more we see God work, the more we want to be part of it!  Let’s grow together.

I’m positive Esther would have worn this look – it’s almost Kate Middleton-esque.  It’s certainly what I would wear, were I a queen.

Seersucker: Not Just for Southern Gentlemen

Seersucker. I have such a love-hate relationship with this material. On the one hand, I love it’s crisp, summery feel.  On the other, it’s often used to make such ugly clothes that I just can’t support it.

This jacket errs on the love side.  Since it’s not actually summer yet – despite my valiant efforts to wish it so – I paired the jacket with a cooler dress, drawing out the cream accents in an otherwise largely green and black piece.  The tan neutrals in the jacket allowed me to wear brown accessories, so I added one of my new pairs of shoes, and some gold to complete the look.

I really like this dress because it’s one-shouldered and has an interesting asymmetrical hemline.  But, since I often find myself wearing it to work, the one-shouldered detail is hidden.  One day, I will wear it as intended, but until then, it’s nice to get some professional use out of it, as well. 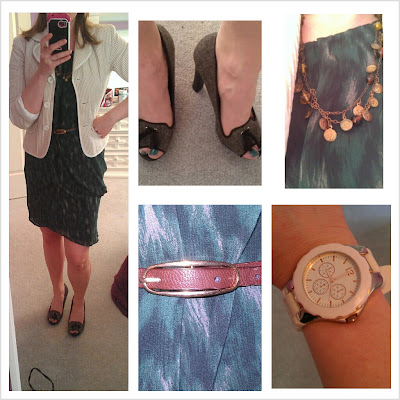