First of all, before everyone starts staging an intervention, I HAVE taken down my Christmas tree.  It is still sitting in my spare room, waiting to go in the closet, but it is down.  However, since I took such an inexplicably long break from blogging this month, some of these pictures are old.  So, sorry about that.

I’ve been taking a class online in web design and it’s got me all fired up to create my own template (or at least pick one that requires some more tinkering than the standard WordPress template), so be on the lookout for changes over the next few months!  (But don’t look too closely…this may take a while.)

Anyway, this outfit.  I bought this MASSIVE sweater dress from a rummage sale to benefit Beloved Atlanta, an anti-trafficking organization.  I think it’s originally from Anthropologie, and it was $10, so I bought it – even if it is a large, and I’m not.

Honestly, I’m not sure what you’re supposed to do with it.  I wanted to wear it as one of those cool, long, open cardigans I see everywhere, but it’s just too big for that.  And then there are buttons in weird places.  So, this belted look is the best I could do, but I think it works.  And y’all, this is the warmest thing I’ve EVER put on my body.  Honestly, I thought I wouldn’t be able to wear unless I traveled outside of Georgia, but I guess my blood has thinned, because I’ve worn it several times.

I realize I’ve yet to show you these over-the-knee boots actually over the knee.  I really prefer them that way, but with the length of this skirt, they had to be folded over.  I did take two pictures for you of the detailing, though, so you could see the super cute zipper down the backs and the super fuzzy buckle on the sides.

Stay safe, friends in the snow!  And send some my way, if you think about it.  I asked my boss if we could have a sympathy snow day this week…he didn’t think that was as good an idea as I did.

Recently, I went on a date that ended in disaster.   Fortunately, the outfit I wore was so awesome, it almost didn’t matter.  Almost.

For Christmas, I got the grey dress I’m wearing below.  It’s a great piece because it is so simple to match – grey is basically a black alternative.  Dressing cute in winter isn’t always the easiest thing – how do you make bulk look sexy?  But, this dress is a light knit – a sweater dress that doesn’t add a ton of bulk.   I belted it to further define my waist, paired it with leggings and ankle strap shoes (ankle strap shoes and leggings are a tricky combination.  They can make legs look very stocky, so ask a friend if it works before attempting), and topped it off with a colorful scarf so I didn’t look like I was going to a funeral.  The scarf has several different colors in it, and I chose to pull out the orange with some dangly earrings.

Tomorrow, I’m going to show you how I made this same dress look completely different two days later.  That’s my favorite thing to do – remix outfits.  I try to seldom wear the exact outfit twice, so I have to get creative sometimes.  You can be the judge tomorrow of how well I did. 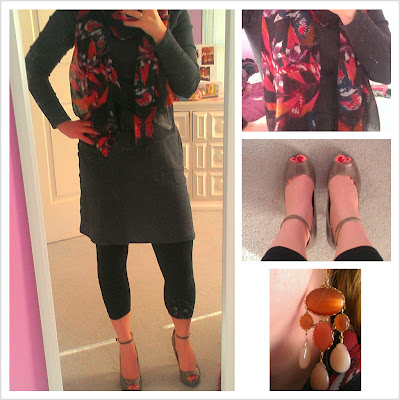